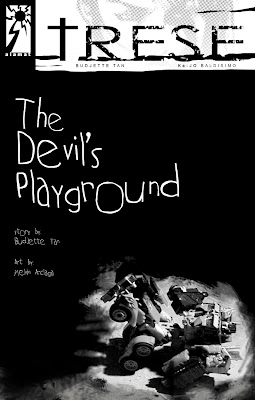 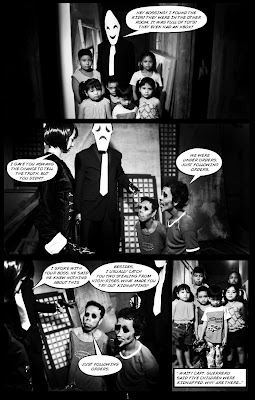 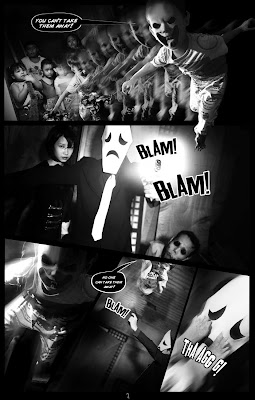 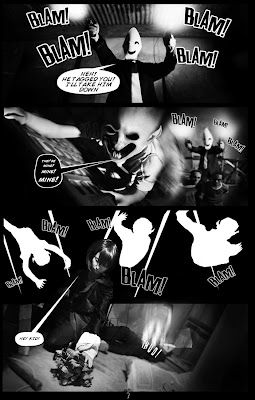 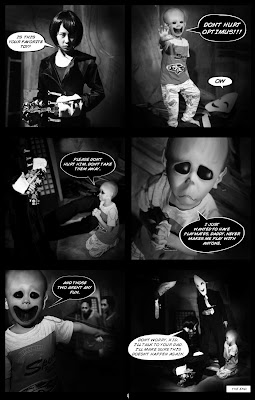 This TRESE story was put together by the one-man production crew of Melvin Arciaga. I first met Melvin online at DeviantArt. He sent me a message, asking permission to cosplay Trese. I said yes and half-expected to see pictures of a girl wearing a trenchcoat taken in some dark alley. The pictures and scenes that Melvin later sent me just blew me away. (CLICK THIS LINK TO SEE THE PIX)

Couple of months ago, Melvin told me he'd like to do a four-page fumetti story featuring TRESE. He also made one request: his nephew Prince, a big Trese fan, wanted to appear in the story as an aswang. How could I say no to, probably, Trese's youngest fan. (Actually, he's a fan of the Kambal, according to Melvin.)

Anyway, this is just practice for Melvin, who's now gearing up to do a 200-page fumetti for his thesis. We've seen the preview art/pix and it looks great! Hope to eventually see that epic in some future Komikon!

unang beses nakita ko to, sumabog ang utak ko. (and pretended not to be frightened by Prince aswang)

and i'm glad Trese did not kill Optimus