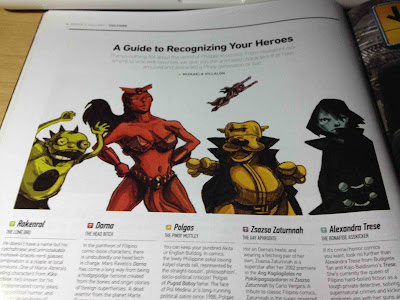 In the April issue of ROGUE (yup, the one with Solenn Heussaff tempting you with a bar of Magnum) you'll also get to read Mixkaela Villalon's "A Guide to Recognizing Your Heroes"

The top five comic book characters in the article were Manix's "Rakenrol Guy" who was labelled as "The Lone Bro"; while Darna was labelled "The Head Bitch", Polgas is the "The Pinoy Muttley", Zsazsa Zaturnnah is "The Gay Aphrodite" and Trese is "The Bonafide Asskicker."

Also mentioned in a sidebar article were Andong Agimat, the Kubori Kikiams, Gerry Alanguilan's Elmer, Manix's reporter from News Hardcore, and Greg Narvas' "I Was A Teenage Filipino Skinhead" 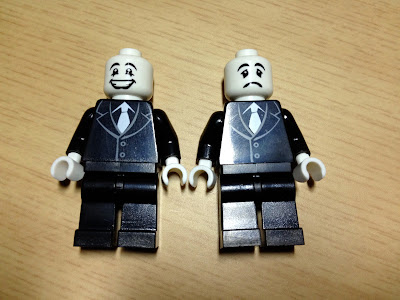 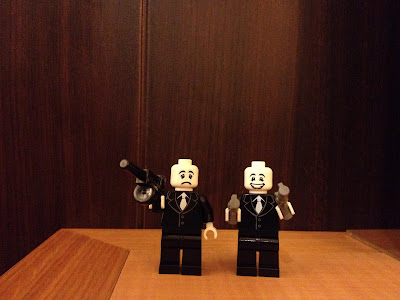 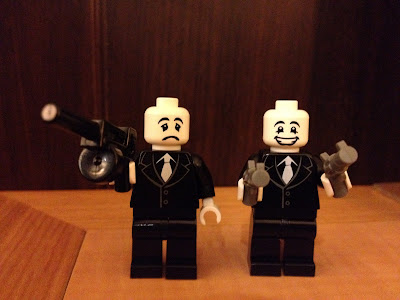 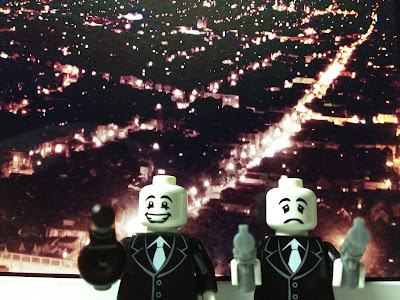 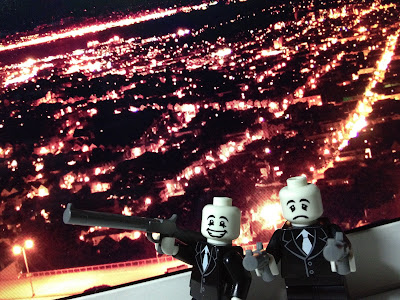 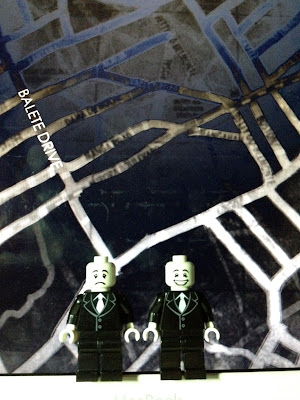 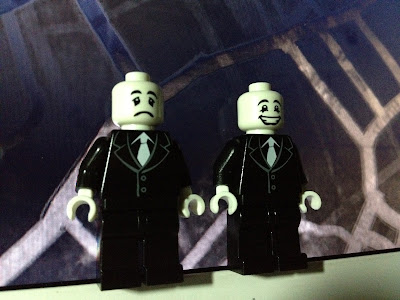 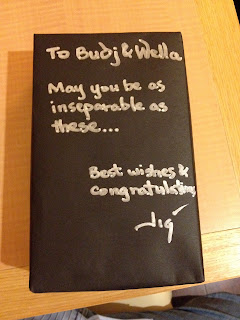 These Lego Kambal Men were ordered piece-by-piece by our friend Jig. He wanted to give it to me and Wella as a wedding gift, but finding all the right pieces took some time, so we were only able to receive it last week. Many thanks Jig!

Now... if we can only convince Lego to really produce a Trese and Kambal playset, then that would be great!

Email ThisBlogThis!Share to TwitterShare to FacebookShare to Pinterest
Labels: Kambal

Yesterday, I received an email from Ms. Eileen Sy, who accused me of influencing the decision of which people would get interviewed by C.B. Cebulski in his recent search for Marvel comic book artists.

Below is the email from Ms. Sy, after which you will read my reply to her, which I have decided to make public.

It's a shame that you forcibly included 8 of your buddies out of 34 artists in CB Cebulski's talent search. It can now be explained why more talented people were excluded.

Aspiring artists like us are now questioned your credibility and looked at you as the next greedy agent of comics artist.

I wonder why Migs Ramos is so disillusioned with your Trese garbage. The padrino system is still alive and kicking in person like you.

1
Out of the 34 artists shortlisted by C.B. Cebulski, only two of them were my friends. They were handpicked by Mr. Cebulski himself and his decision was not influenced by me or anyone else.

3
If you view my work as “garbage” then that is your opinion.

4
There was no “padrino system” used in choosing those 34 artists. Everyone got a fair chance of submitting and everyone was chosen based on what they submitted. 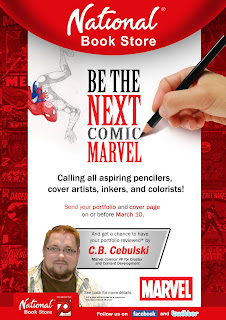 I know for a fact that my other friends submitted their portfolios and they did not get into the shortlist. These artists have won local awards for their comic book work, but Mr. Cebulski did not pick them. If I was really “forcibly including” people into the shortlist, then those friends of mine should’ve got in the list as well, but they didn’t.

There is no “favoritism” or “padrino system” when it comes to National Bookstore and local comic book creators.

Miguel Ramos and National Bookstore have shown full support to the local comic book scene, as well as support to all Filipino comic book creators.

In the past years, they have sponsored and supported the Metro Comic Con and the Komikon.

They have hosted the comic book launch of Gerry Alanguilan’s Elmer, and Superior, which was drawn by Leinil Yu and Gerry.

Go to the branches of National Bookstore now and you’ll see that they distribute all kinds of local comic books: from graphic novels published by Visprint, like Kikomachine, Trese, The Filipino Heroes League, Zsazsa Zaturnnah; to self-published comic books like Kalayaan, Bayan Knights, Pugad Baboy, and Beerkada.

Ms. Sy, if you feel bad that you didn’t get in the shortlist, then don’t blame it on me and don’t blame anyone else.

I have been writing comic books for the past 22 years and I have been rejected by Marvel Comics, DC Comics, and even Atlas Komiks.

I am lucky and blessed to have found a publisher like Visprint, who finally accepted my work and supports the stories I tell with Kajo. But before I found a publisher who accepted and approved of my work, it meant I had to keep writing and keep getting rejected for 17 years. And in the past five years, I have submitted and pitched “Trese” to Vertigo Comics, Marvel Comics, and Image Comics and I still got rejected. But that has not stopped me from writing more stories and from improving my craft.

In all those times I got rejected, I blamed no one else but myself.

And as I write my next story, I make sure that this is the best one I’ve written and hope that this will be the one that the publishers will like and get me accepted.

Lastly, if this were just an email critiquing my work then I would’ve probably replied to you in private. If you really believe that my work is “garbage”, then you are entitled to your own opinion and would feel no need to try and change that belief.

However, the reason I am responding publicly is because your baseless accusations casts doubt on the recent talent search conducted by Mr. Cebulski. It is unfair of you to say that some of them got in because of some “padrino system”.

Out of the 34 artists, there was a good mix of professional artists (those who have been published here and abroad) and amateur artists. There was even one who just graduated from college. They were all chosen based on the portfolio they submitted, based on their skill and hard work.

I am amazed that you took the time to sit down and write that email, make unfounded accusations, call me names and call my work garbage, when you could’ve used that time to draw more and improve your craft.

p.s. if you ever want to show your new and improved portfolio to Mr. Cebulski, feel free to email him at : cbcebulski @marvel .com 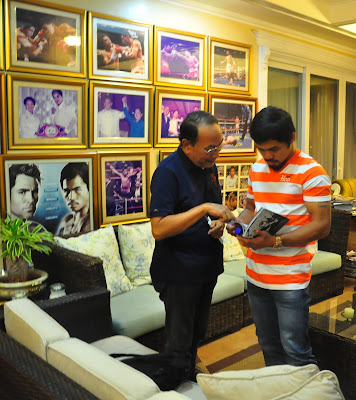 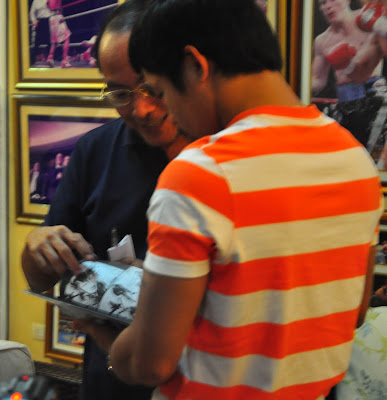 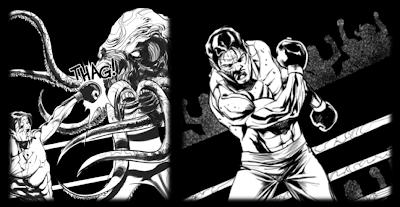 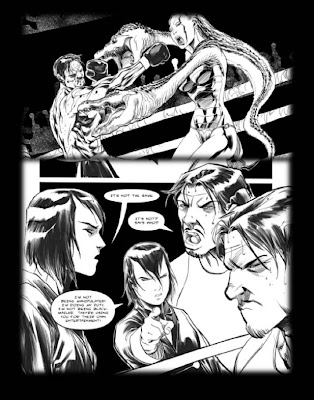 UPDATE: Kajo's artwork got sold for P5,000! Thank you very much to very one who placed a bid on it!


The original illustration of Señor Armanaz, Datu of the Tikbalang Tribe" by Kajo Baldisimo, will be auctioned of at the heARTworks event. 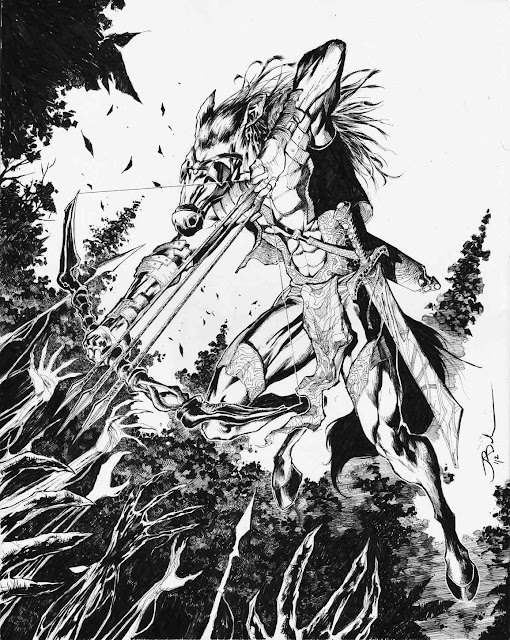 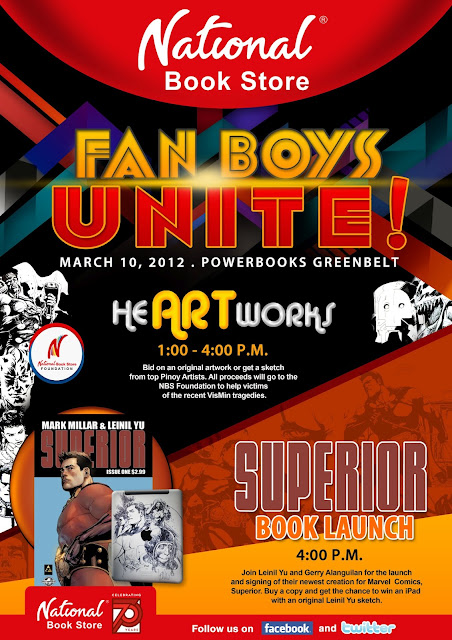