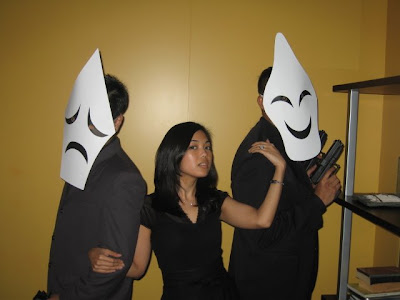 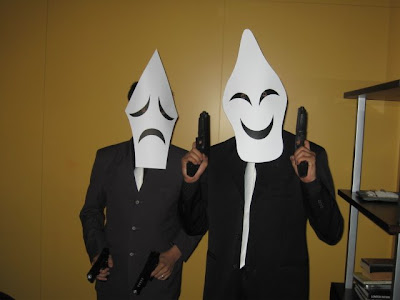 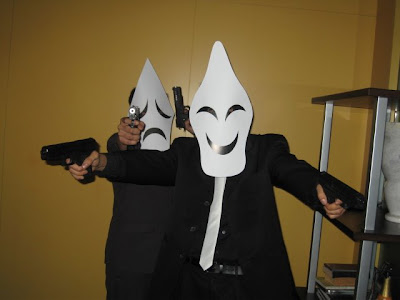 Yesterday was the agency's annual Halloween Trick-or-Treat Party for the kids. Greg and Ernie decided to dress up as the Kambal. They couldn't get any of the girls to come dressed as Trese, but they were able to ask Lady to pose with them for one picture.

(Now, if I can only convince them to attend the Komikon, other events, and my birthday party.)
Posted by Budjette at 12:45 AM 1 comment: MEET THE `TRESE` CREATORS
By Athena Fregillana, Pictures by Paul Del Rosario
This interview originally saw print in the SINDAK Horror-Thriller Magazine(April 2006 issue). Originally written in Filipino, I translated it into English for our international readers.

Budjette Tan and Kajo Baldisimo are part of a new generation of comic creators who are trying to save our almost lifeless comic book industry. How did the TRESE series start and why is this being considered one of the famous Pinoy komiks today?

Read the compete interview at:
komix101.blogspot.com
Posted by Budjette at 12:32 AM No comments: 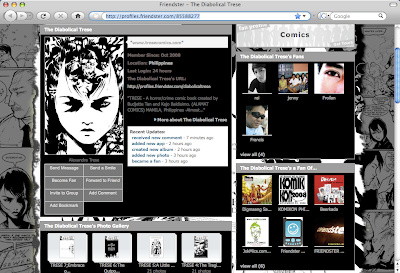 Check it out! It's the TRESE-Friendster Fan Page put together by the wonderful KOMIKON crew and the friendly people at FRIENDSTER.

So, if you want to also hang out at Alexandra Trese's Diabolical club and become the ka-Friendster of the Kambal and Hank the Bartender, then just click on:
http://profiles.friendster.com/85588277

MANILA, Philippines -Almost from the very beginning, Budjette Tan has been surrounded by the unusual. “When I was a newborn baby, my parents moved into what turned out to be a haunted house,” he explains. “The ghosts were seen by my yaya and my uncles. My parents didn’t believe in such things, until one summer day after my mom gave me a bath. She said the right side of my face suddenly wrinkled up—that it looked like the face of an old man. She prayed over me until I became normal again.” Psychics were summoned and a séance held. “The psychics told the spirits that they had to move on to the next plane. The haunting stopped after some time.”

Even Tan did not know that something similarly spooky would redefine his life later on. With him doing the writing and Kajo Baldisimo providing the art, Tan came up with “Trese,”a comic book series that follows mysterious investigator Alexandra Trese as she helps the police solve unearthly crimes in Metro Manila—sometimes with some direct action from Trese and her bizarre bodyguards, the Kambal. 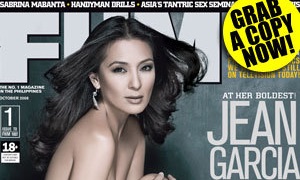 Trese did not appear in the nude.

Trese also did not allow herself to be interviewed (but I think the Kambal were more than willing to attend the Jean Garcia photo shoot).

In the October issue of FHM, Marc Laurenze put together a Halloween alphabet of sorts and Trese was featured under the letter "U" for Underworld.

Thanks Marc!
Posted by Budjette at 9:32 PM No comments:

We were recently invited to be part of the opening of the PLANET X comic book store.