The great thing about having insomnia the day before a big event is that at least you’re awake to get to the event on time. With only two hours sleep, I actually got to the UP Bahay ng Alumni at 9am. (Kajo didn’t sleep at all and arrived a couple of minutes after I got there.)

Before we set up at the Visprint table, I asked Syeri if we could give away some Alamat comic books (as a way to commemorate 14 years of Alamat Comics). She said yes and I brought down four boxes (14 years worth of unsold Alamat Comics) and said they could give it away to everyone who came to the Komikon. (Well, it wasn’t really 14 years of unsold comics, more like 4 years worth. We gave away copies of Batch72, Indigo Valley, Tattooed, TKS:The Kill Stalker, 3 copies of ARCHON, 2 copies of EXODUS, and a partridge in a pair tree.)

An hour or so later, we were set-up at the Visprint table and Team Skyworld (with Ian, Mervin, and Shali) was set-up at the Alamat table. They were joined by Paolo Fabregas, who has a sneak preview to his upcoming comic book FILIPINO HEROES LEAGUE. Paolo introduces us to the government sponsored Pinoy super team that is now not sponsored by the government.

Ian & Mervin had a sneak preview of their next book SKYWORLD: TESTAMENT. The unlettered pages can be seen at: http://iantoy.deviantart.com/gallery/

We had free Trese posters for all the people who bought copies earlier in the day.

By the end of the day, we were surprised that we already sold all 100 copies of TRESE. (We apologize to the last two guys who came to the table wanting to buy a set. Hope you were able to find a copy of Trese 2.)

THANKS TO EVERYONE! We do hope you can give us feedback on Trese, Skyworld, The Last Datu, Kadiliman, and The Filipino Heroes League.

Another surprise we got was Mica, who cosplayed Trese and we got to pose with our creation.
Mica and Wilson “Wolverine” Tortosa shot a Trese mystery at the Komikon and can be viewed at:
http://batangbatugan.multiply.com/photos/album/10/A_Summoning_At_Komikon_2008# 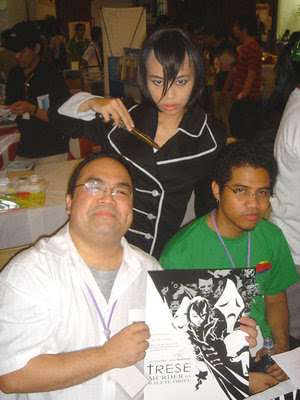 Quote of the day:
“I hate you! I read Trese (Our Secret Constellation) and it made me cry!”—Oscar

It was great to meet finally meet the people who you've only talked to online, the artists who've contributed to Exhibit 13, the bloggers who've reviewed the book, the readers who collected the original/photocopies editions of Trese. Thank you for all coming over. Very happy that we finally got to meet.

In between the signing and the selling (and the sweating), it was also great that I got to talk to some of the guys (usually while standing in front of the giant aircon unit or by the doorway, trying to catch some fresh air). It was chance to catch up, talk about comics, about future projects, the projects that got delayed, and crazy ideas for next year.

Special thanks to the EK-gang for coming to the Komikon. Hope you like the titles that you got!

More pictures swiped from the blogs people we met that day. 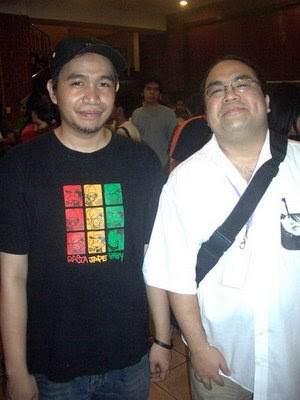 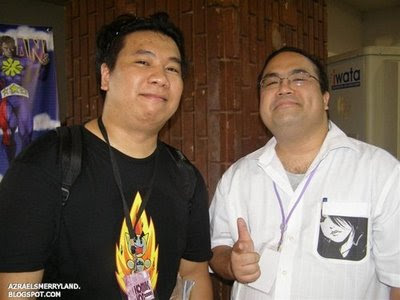 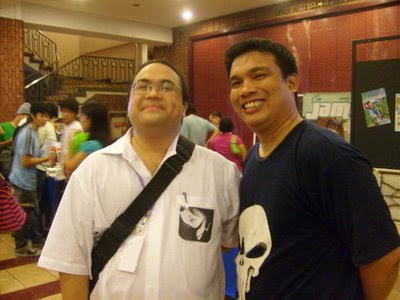 Also got to meet the Philippines’ first puppet rock star GORGORO!!!
He was distributing his comic book, which contained his not-so-secret origin.
Must watch Gorgoro’s next gig! 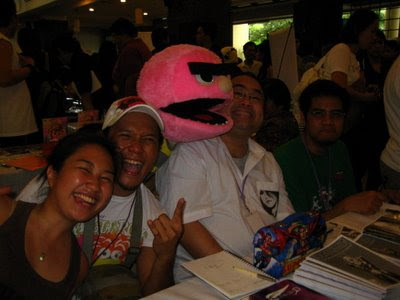 Email ThisBlogThis!Share to TwitterShare to FacebookShare to Pinterest
Labels: Komikon

In the world of Alexandra Trese, heroine of the comic book series "Trese," there are many things that go bump in the streets of Manila whenever darkness falls, and the city’s enthusiastic club-goers only make up a small portion of it. Manananggals, tiyanaks, tikbalangs, and duwendes make their presence felt when the lights go out, and it is Alexandra Trese’s job to keep them in line.

This alternate Manila where the creatures of Philippine mythology roam free and wreak havoc on the lives of ordinary Filipinos is the creation of the team of writer Budjette Tan and illustrator Kajo Baldisimo. Members of opposing ad agencies who knew each other because of their shared love for comics, the two decided to start "Trese" in June 2005.
Read the complete interview at:
http://www.mb.com.ph/issues/2008/11/01/YTCP20081101139546.html
Posted by Budjette at 1:03 AM No comments:

The spell both Budjette and his partner Kajo cast comes not from their influences mentioned in past interviews like the comic book “Planetary” or “Twilight Zone” but rather from Neil Gaiman’s “Sandman.” The heroine Trese calmly interrogates a rich dragon man who is heir to a Chinese mall empire and in another panel seeks help from a Quiapo merchant who can talk to cats. The world of “Trese” is a place where you must suspend your disbelief and accept that crime has taken a weird turn as the authors describe it.