Many thanks for Dan and Dang of IDEALS Creatives for inviting me to be part of last year's Pecha Kucha.

In Pecha Kucha "each presenter is allowed 20 images, each shown for 20 seconds each giving 6 minutes 40 seconds of fame before the next presenter is up."

So, I decided to do make my presentation a tour of Trese's Manila, which became a 6 minute 40 second Trese short story.

Doing this event was a dream come true. One of my favorite scenes in the move CAPOTE was the part where he read the opening chapter of his book to jam-packed theater. It amazed me at how people were willing to spend a night watching a man standing in front of a podium and slowly read his tale to them. No special effects. No grand soundtrack. Just the man, his story, and the sound of his voice. Watching that scene, I wondered when I would get the chance to do the same thing.

It was wonderful to be given the chance to do just that. So, thanks again to Dan, our super-host Jao Bautista, and the team who put together Pecha Kucha Manila.

Watch the rest of the talks at
http://www.youtube.com/user/pechakuchamanila

ABOUT PECHA KUCHA
Pecha Kucha Night, devised by Astrid Klein and Mark Dytham (Klein Dytham architecture), was conceived in 2003 as a place for young designers to meet, network, and show their work in public.

But as we all know, give a mike to a designer and you'll be trapped for hours. The key to Pecha Kucha Night is its patented system for avoiding this fate. Each presenter is allowed 20 images, each shown for 20 seconds each giving 6 minutes 40 seconds of fame before the next presenter is up. This keeps presentations concise, the interest level up, and gives more people the chance to show.

Pecha Kucha (which is Japanese for the sound of conversation) has tapped into a demand for a forum in which creative work can be easily and informally shown, without having to rent a gallery or chat up a magazine editor. This is a demand that seems to be global as Pecha Kucha Night, without any pushing, has spread virally to over 200 cities across the world.
Posted by Budjette at 1:23 PM 1 comment: 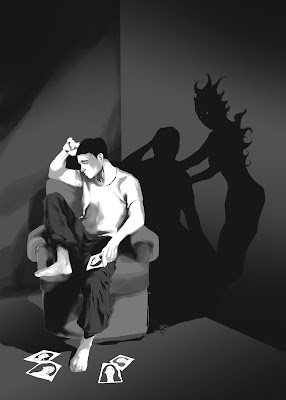 TRESE: I CARRY YOUR HEART

“I came from one of the dorms, near the university. College boy was found dead in his room. It was locked from the inside. No sign of forced entry. No signs of struggle and no wounds on the body. And since there were no visible means of suicide and no note, my guess is he died of natural causes. We’ll just have to wait for Spunky from the morgue to tell us otherwise.” Guerrero finished the rest of his tale as well as his coffee.

Trese closed her eyes and asked, “Was the body drenched in sweat? Or at the very least, did his forehead and lips have beads of sweat?”

Guerrero thought about it for a second and said, “Why, yes! Yes, it was!”

“And did the air smell sweet? As if you were standing near a lot of fruit?” Trese continued.

“Yes. I thought it was the boy’s cologne or something. Why? You know what killed him?”

“It was a bangungot!” the Kambal raced to answer the question. Trese raised her glass to the Kambal for giving the right answer.

READ THE COMPLETE STORY AT:
http://diabolical13.blogspot.com/2010/02/trese-i-carry-your-heart.html

and for those interested, here's the traditional description of a bangungot based the research and writing of Maximo D. Ramos:
BANGUNGOT

The Bangungot (called Batibat by the Ilocanos) is described as a large, dark man or woman who sits on the chests of sleeping persons. Unable to breathe, the victim dies unless medical attention is given. The name comes from the root words “bangon” (to rise) and “ungol” (to groan). As a medical phenomenon, bangungot is exclusive to Asians, primarily Filipinos. All victims are males. Bangungot is not to be confused with sleep paralysis, which is common and harmless.
Posted by Budjette at 1:29 AM No comments:

UPDATE: my apologies to the U.P. WRITER'S CLUB. I will not be able to attend today's forum on comic book writing. Hope to be part of your next forum. 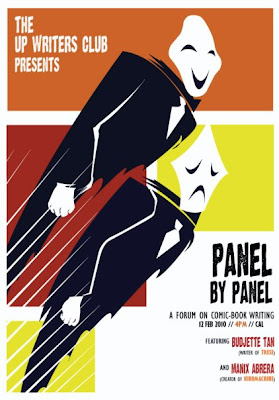 And on FEB 13(SAT) I will be at U.P.L.B. along with the other guys from Alamat. (Kajo will not be able to join us on this day, since he will be far, far away.)

Posted by Budjette at 9:23 PM No comments: