Many thanks to Betty Regala for including me / interviewing me for their show ART REPUBLIK.
My bit starts at 16:35 into the interview. http://youtu.be/7hvuONdJmY4?t=16m35s

Art Republik's Episode 9: Skin, Street and Comics is part of the First Season of the show aired on Knowledge Channel, SkyCable 42. For more information on Art Republik, like them on Facebook, www.facebook.com/artrepublik
Posted by Budjette at 11:13 AM 1 comment:

Email ThisBlogThis!Share to TwitterShare to FacebookShare to Pinterest
Labels: interview 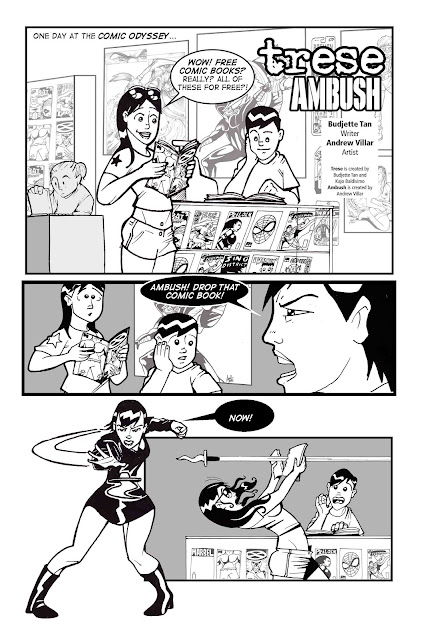 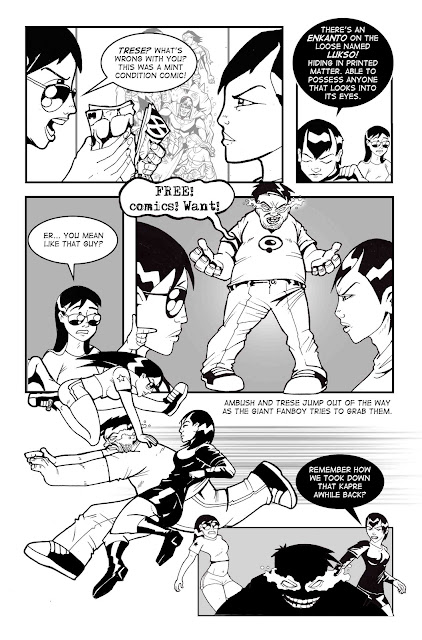 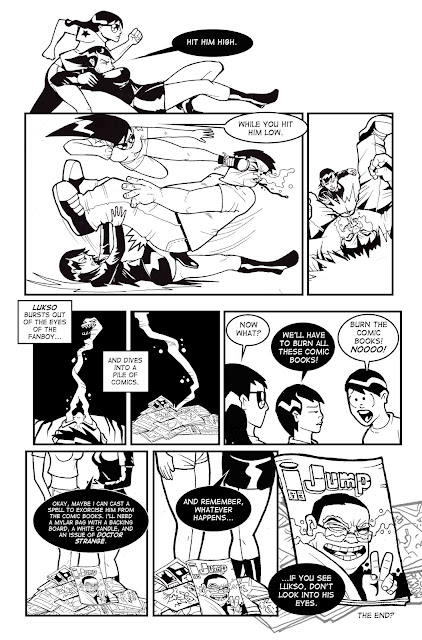 JUMP
Story by Budjette Tan
Art by Andrew Villar
Posted by Budjette at 3:15 AM 2 comments:

It’s been a week since Summer Komikon 2012 and I haven’t had the chance to talk about the comic books that we launched.

Me and Kajo had this grand plan to release the new Trese book last week, but several things kept me busy and we were only able to release “Maverick Rider”, the first case from what will be Trese Book 5.

Aside from my wonderful dayjob, my nights were filled with editing the following comic book projects:

Last September 2011, I got a call to meet up with movie producer Dondon Monteverde and director Erik Matti. They showed me the initial edit to their new movie TIKTIK: THE ASWANG CHRONICLES starring Dingdong Dantes, Lovi Poe, Ramon Bautista, Joey Marquez, and Janice de Belen.

What makes this movie different from the usual Pinoy horror movie is that they shot the entire film in a studio and everything was shot against a green screen. Similar to the process done in “300” and “Sin City”, TIKTIK’s world will be completely computer generated. Of course, all the aswang will also CG’d! Since it would take them a year to do all those SFX, they still wanted a way to get people excited about the movie months before the actual screening.

So, they thought of releasing a comic book adaptation and asked me to help them put it together.

Working with Direk Erik, I adapted and edited down the two hour movie into a 60-page comic book.

We then brought in James Palabay, Melvin “Taga-Ilog” Calingo, Jon “Codename: Bathala” Zamar and the rest of the Digital Art Chefs to bring the comic book to page.

And just like many action-suspense movies, the copies of TIKTIK arrived in the nick of time, with James crashing through the gates of the Komikon with copies at hand. (Okay, he didn’t really crash into anything.)

Later in the afternoon, the crowd was surprised by the arrival of Dingdong Dantes and Lovi Poe, who came to talk to about the comic book and the movie.
Dave Yu, the SFX director of the movie, also went up on stage and talked about the process of creating the world of TIKTIK and bringing aswang to life.

I can only hope and wish that TIKTIK the comic book and the movie much success. If all goes well, then they plan to make more ASWANG CHRONICLES movies and in between all those movies, they might just make more comics.

Can you imagine the possibilities?!

For the first time, a movie company is investing in the comic book medium to promote and push the world of their story forward.

If all goes well, then, knowing the “gaya-gaya” mentality of the Pinoy, maybe the movie producers of the Metro Manila Film Fest will also want to have comic book adaptations of their movies. They might even want to do spin-offs or sequels or prequels.

If all goes well, then it will put the spotlight on the need for more comic book creators.

Ten years ago, Mervin and Ian met for the first time and it was love at first sight. (Okay, I’m making that up!) Mervin and Ian met because a sideline project and while having a smoke, their small talk lead to their love for comic books and how they wished someone would make a comic book that really delved into Philippine myth and folklore.

Cut-to: a decade later and they have finally taken that glimmer of an idea and made it into a 300-page epic.

The funny thing is, when the guys were putting together the first book, they asked me to look at it, I gave my comments, and when they comic book was printed, I was suddenly labeled editor. And thus, I became SKYWORLD’s editor. But with the combined power of me, Mervin, and Ian, a typo always seems to escape our attention. (For example, if you have the first printing of Skyworld Book 1, you will notice, in the fine print, that it was “Copywrite (C)2007”)

Aside from finally bringing this centuries-spanning fantasy to a close, I’m also happy that National Bookstore agreed to publish this two volume graphic novel.
After ELMER, I was wondering if they would venture into doing more comic books and I’m just glad they picked SKYWORLD to be their next title.

So, aside from movie companies exploring the comic book medium, we now have the country’s largest bookstore publishing comic books. What else can go right?

I remember having a discussion with some friends (or did it all happen online somewhere?) about the viability of the comic book medium in the Philippines. At that time, we were saying, your best bet is to produce a graphic novel that can be distributed in bookstores. Rather than try and publish a monthly comic book, to try and scrabble to meet that monthly deadline, to try and scrounge for enough funds to print it on a monthly basis, it would be better to just finish a 80 to 100 page graphic novel (which is, roughly, the length of a 4 to 5 issue mini-series) and release it in one go. And if you’re lucky, if you can find a publisher who likes it, then you don’t have to spend for printing and promoting it.

But, the thought of a monthly (or bi-monthly) comic book publication still lingered at the back of my head. I knew that attempting to do a monthly title (like Marvel and DC) would prove difficult unless you had a dedicated team working on it, which means you’ll need to pay this team on a monthly basis. In the past, there have been many attempts to release a monthly comic book. Even though they lasted a couple of years, they were not able to release it on a regular basis.
Which lead me to believe that the one-shot graphic novel was still the best route.

And yet, every Komikon, I take look at the pile of photocopied comics I bought, and for the ones that like, I always wish there was a way to get them into the hands of more readers. I also wished that more people got to know our local comic book writers and artists.

So, what if, instead of trying to release one title about one character, written and drawn by one creative team, there was a way to “crowd source” a comic book anthology. The stories would be made up of one-shot stories (so, we don’t need to worry about serial stories whose ending might never see the light of day or take ten years to finish)

For years, I have been pitching comic book ideas to Summit Media, hoping the country’s largest magazine company would produce local graphic novels.

In 2009, Summit took a chance with my idea for a comic book anthology of horror stories. We launched UNDERPASS during the Komikon, where it was well-received. But when it was distributed in the bookstores, it only sold a couple of thousand copies and didn’t merit a second issue. I talked to people about it, got their thoughts and ideas about why it didn’t work and what would make it better. With my list of mistakes, I had a checklist of “what not to do”.

If “horror” wasn’t something that would work for the local magazine scene, then what should the content of the anthology be?

Maybe “fantasy” was the way to go. “Fantasy” would cover majority of the comic book stories being locally produced. It would easy to pitch to sponsors that the magazine is like a “fantaserye in comic book form”.

The more I thought about what I wanted to put in the magazine, the more I realized that it was already being done by Paolo Chikiamco in his website: www.rocketkapre.com. His site already reviewed and did interviews with fantasy creators. He also published/uploaded fantasy ebooks. The only thing he didn’t have in his site, were comic book stories.

In December 2010, I sent an email to Paolo, pitching to him the idea of a magazine version of RocketKapre. Turns out he had a better idea. He realized there was a gap in the market: no one was talking to the young-adult (YA) reader. We have all these kids (ok, they’re not all “kids”) who love reading Harry Potter, The Hunger Games, Percy Jackson, Twilight, Vampire Dairies --  but what happens after they’re done with those books? Was it possible to offer them something else, something that was uniquely Pinoy, stories that had a touch of Philippine myth, folklore, and history?

We wanted the magazine to have comic book stories, prose stories, interviews and reviews, as well as a “how to” section. We envisioned the magazine to be entertaining enough for reader to want to collect it, but informative enough so that schools would want to subscribe to it and have it available in their libraries.

With those guidelines in place, we put together a sample issue, pitched it to Summit, and thank God, they said to publishing this “pilot issue”.

Much like the “pilot episode” of a TV show, the chances of Kwentillion becoming a “regular series” is in the hands of the viewer (or in this case, the reader).  Because if and when KWENTILLION becomes a regular monthly (or bi-monthly) comics magazine, then it will become a venue for new comic book characters to be told, a chance to meet and get to know more Filipino authors and artists, and more importantly, an opportunity to share and tell a million new stories.

As of this writing, KWENTILLION has been spotted in several branches of National Bookstore, Powerbooks, and BestSellers. We hope it will be found in a branch near you.

I’ll give an update as to when SKYWORLD Volume 1 and 2, and TIKTIK: THE ASWANG CHRONICLES will be sent out to the stores.

I hope that these comic books signal a start in the Philippine comic book scene. I hope that it will be the beginning of many opportunities for comic book writers and artists to share their craft and their stories. Of course, for these comic books to succeed, it is important that it gets the support of as many readers as possible. So, if you like any of these books then LIKE their pages on Facebook and hit the SHARE button to tell all your friends about them.

Now that these projects are all done, I hope you don’t mind if I go back to writing Trese. See you at the October KOMIKON! 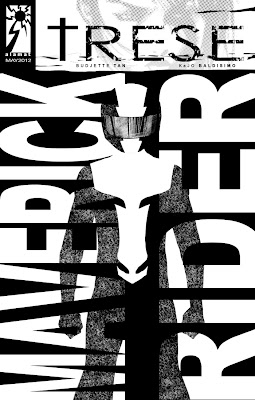