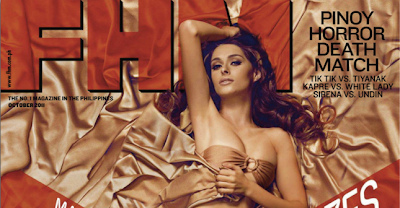 
Words by Anton Umali and Gelo Gonzales
Art by Mervin del Mundo (Robot with a Smile)
Posted by Budjette at 3:04 PM

Tikbalang VS Sigbin would be nice

It would be cool if there was a video game featuring these creatures. :D

Yet another excuse... erm, reason to buy FHM "for the articles."