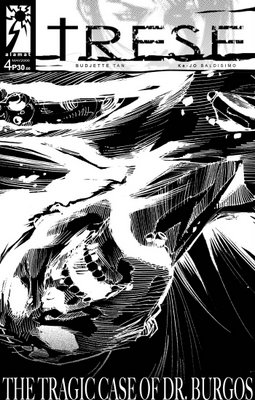 
CLICK HERE TO FIND OUT WHERE YOU CAN BUY "TRESE"


UNDER THE INFLUENCE: Where we reveal the sources that inspired and influenced this Trese mystery.

The santelmo is another creature from Philippine folklore that has different descriptions, depending on which region of the country the story is told. Most stories have described it as flaming skull, seen on country crossroads. Fishermen have said that it is a ball of fire seen floating above the sea. The santelmo is said to be the souls of sailors who drowned at sea or an omen of bad things to come.

The oriol is a snake creature from Bikol folklore. It was believed to have lived in Tiwi, Albay. She lived in the hot springs in the area and lured men to join her in the pool by transforming herself into a beautiful woman. She would then devour them and bring their souls to her father Asuang.

The cellphone-spelling casting scene was an idea I got from one of Tony Perez’s books. He mentioned how the cellphone can act like a magic wand and how typing in a specific set of numbers and pressing the SEND button is like casting the spell.
Posted by Budjette at 11:24 PM

This has been another feast, budj. thanks. You have a way of turning bizzare cases of love into a great fantasy- filled ride andend it with a squeeze of the reader's heart. Painfully good.

Also, Kajo's art has becoming more and more complex, growing in each issue.

I enjoyed reading this :heart:

Wow! Another KAMBAL fan. Join the club.
Yup, definitely planning something interesting with the twins.

Maybe we get around to doing that during the long weekend.

How does the supernatural justice system work?

In trese 1, the aswangs were killed, and the girl died.

In trese 2, the tikbalang i presume was given back to the tribe for punishment

Anyway, my point is, how bout judges, an engkanto trial court sytem or whatever? It's evident there are laws in your story but how are these enforced? And assuming the different tribes/beings give out their own punishments, is there an all encompassing justice system that governs all the engkantos/supernatural beings?

wow.. this issue really creeped me out 'coz it kinda hit the bullseye pretty deep.. hehe..
anyway.. it's me.. (jacopo112358 from livejournal)

"hopeless romantics are such joy.." that line killed me.. (in a good way..) keep up the great work.. ok? you guys inspire me..

Yup, I just couldn't resist but put Kupcake and the band in that scene.

You must've been only 12 when we first launched that. hehehe

i am dreaming, or you all know the end of it??? it's unfair, i live abroad and on the net i can just read the 20 first pages;
such a cruel destiny!!!

"i am dreaming, or you all know the end of it??? it's unfair, i live abroad and on the net i can just read the 20 first pages;such a cruel destiny!!!"

All TRESE stories are only 20-pages long. :)

Does #4 feel like a cliffhanger ending?
We didn't mean for it to feel that way.

wow... a comment from the dark lord himself... we are honored (and scared)...
MWHAHAHAHA!!!

Thank you! Hope you like the rest of the stories. :-)

wow.. i really like reading trese..nakakatindig balahibo while reading all trese issues..

btw..meron pa ba next issue??and may colored version ba??hehehe..i will draw trese and the kambal and i will post it sa deviantart..ok lang po ba??si kajo may accnt ba sa deviantart??

Glad you like what you've read so far. And so far, TRESE #6 is the latest episode. #7 should be done by February. Don't know if we'll upload the whole #7, but we'll definitely make it available in the comic book stores listed above.

I'm not really sure if Kajo has a Deviantart page, but you can check out his art at: http://kajobaldisimo.blogspot.com/

Please do send me a link to your TRESE/KAMBAL pin-up when you're done and maybe we can include it at:
http://exhibit13.blogspot.com/

i'm glad you read my comment..i can't wait the next episode #7..so excited..i wan't to collect the trese episodes..but it's only availble at manila area..so sad..because i live here in pangasinan..i can only read it online..wishing to see alexandra trese and kambal moving like what i'm watching anime in television..hehe..i typed to much..

it's my pleasure to send it to you..please give me the e-mail add where i could send it..

thank you very much..

..wow!..your komix rocks. I was reading your first issue a while ago and i'm now stucked here reading the next episodes...(this was just introduced by me from a friend..) astig!.. A fresh and brilliant idea to use our own culture. galing nyu. Pwede na tayong makipagsabayan sa japan nyan,sana maka motivate pa kau ng madaming upcoming artists.(isa na aku dooon. hahaha!)

Hope you can join us at:
http://visprintpub.blogspot.com/2008/05/9-in1-vpe-kolektib-intelidyens.html

tanx to kajo and budj..

"and as allways
becarefull where you
tread, little kajo and budj"

When was the great binondo fire? I'm such a history freak I googled it after reading the story, but I can't find anything about it. Agh! I can't sleep until I know when it happened. Or was it not a real thing? T.T

we should to be a set of books called FILIPINO HERITAGE, which was like an encyclopedia about the Philippine history and culture.

that's where I read about the Great Binondo Fire, which happened in the 1950s (sorry, can't remember the exact date)

when we moved house, we had to given away that set of books (which I now regret)

your school library might have copies of those books. so, time to go offline and do some research in realspace :)

I'll hit the books as soon as our classes resume. Good job po sa Trese series! Ginawan po 'to ng research paper ng isang classmate ko sa Comparative Research class namin. Something about Pop Culture and Folklore. He got a 1.0, I think. Pft. Too bad I didn't discover your books before he did.

I'm looking for your third book now. Just bought my own copy of books 1 and 2 last night. hehe.

Cant help to not leave a comment.Trese its just awesome. Love the use of lore. I agree that it would be interesting to see some underworld justice system. Pero panalo talaga yung "Kambal". I do hope we get to know more about them in the future issues.

I think some of the answers that you seek can be found in TRESE:MASS MURDERS :-)

really Trese's stories are so good! i hope i can read more of these, super cool ng mga scenarios! more stories please! BTW will it be ok if i'll use Trese as my Cover photo in FB, cause i really really think it'll SUPER COOL! thanks!