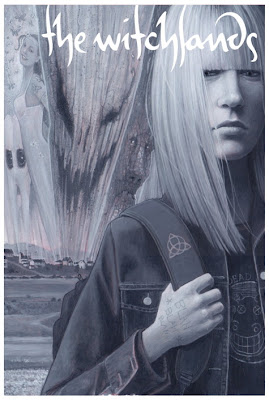 Kurt Busiek recently uploaded the cover and some preview pages of his new series THE WITCHLANDS. He talked about this at the San Diego Comic Con in 2009. The premise was exciting and intriguing. When I read about Wildstorm being shut down, I got worried that we wouldn't get to see this series anymore. So, I was happy to read that it's finally pushing through.


Here's the transcript from the Wildstorm Panel, where Busiek talked about the series, before it was renamed The Witchlands.

It’s a hard series for me to describe, but I’m encouraged by that because the other series that I’ve done that was difficult to describe were Marvels and Astro City. So, I think we’re in good company.

You might see stories in it ranging from the story of a long haul trucker whose wife died when he was on the road so he never had the chance to say goodbye, who finds himself driving her ghost on to her final reward.

The story of some college students who accidentally resurrect the Ninkasi, Sumerian goddess of beer

The tale of a voodoo priest called in to deal with the unquiet ghost of a murdered business.

You understand why, I think, it’s a little difficult to describe.

There will be some recurring characters but like Astro City, they’re not the lead characters. They’re a recurring cast that will appear when we need them and fade away when we don’t

What happened with American Gothic was the whole time I was writing Trinity, I had this year long story all outlined, so the part of my brain that thinks up new stuff kept coming up with new stuff and I kept writing them down.

…when I was done I realized I had a whole bunch of fantasy stories set in the U.S. and I said, well I could try sell all of these as mini series and I’d have to sell each one independently or I could come up with a title, jam them all together, and have to get people to yes only once.

Once I did that, the title American Gothic kind of swam into place, and I started to thinking of the interconnections and think of what else could be done and the series became a lot more about American mythology.

Most fantasy is rooted in European mythology and European mythology is… it’s old. It’s been around for a long time. We don’t know the roots of a lot of it, but America has only been around for a few centuries and we can see the pulling mythology there, stuff that we borrowed from other cultures, or in some cases, enslaved and dragged over with other cultures. Stuff that was here when we got here, stuff that has happened along the way, like, to somebody like me, the idea that, when the silver spike was hammered in and when the transcontinental railway was built, we had built a line of steel all along across the entire country. There’s got to be great mystic symbolic power in that. We’re exploring a vast and mysterious world.

It’s not quite accurate to say that this does for fantasy what Astro City does for superheroes, but they would very much like me to say that. So, I’m saying it.

It’ll be good. The first arc will be drawn by Connor Willumsen, who was in the anthology series Pop Gun and other places. His work is stunning.