The Thing that Lurked in Motel 26 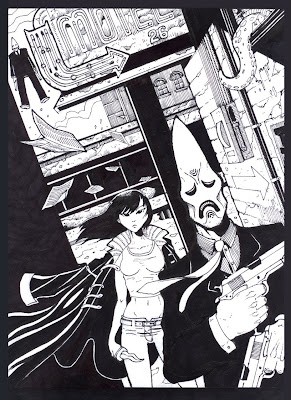 See more Trese artwork at:
http://www.exhibit13.blogspot.com/
Posted by Budjette at 11:00 PM No comments: Links to this post

Thanks to Charles Tan, comic book reviewer and editor Andrew Wheeler got copies of Trese, Elmer, and Martial Law Babies and posted a review at: http://www.comicmix.com/news/2009/04/23/review-three-dispatches-from-the-philippines/

I think this was the first time TRESE got reviewed by a foreigner and it was interesting to see that the Filipino elements in the story didn't get in the way of the telling the tale. Here's the review:

Trese is an altogether more conventional series: it’s a contemporary dark fantasy with a nourish affect, both in art and story, about a young woman in Manila – Alexandra Trese – who’s called in by the police on supernatural cases. The plots are pretty standard for the genre, though Tan does tell them well, with a knack for tough dialogue and important confrontations.

But the art is gorgeously inky, with a sometimes scratchy intimacy and flow. And Alexandra Trese has a whole new world of supernatural entities to work with – vampires and werewolves and faeries and wendigos have been picked over for generations, but kambal and aswang, tikbalang and tiyanak, those are another story. Tan has an entirely different mythology to work with – one he and his original audience knows well, and which he explains just enough so that non-Filipinos can figure them out. But they’re still new and exciting, the way supernatural beings should be – they may have rules and restraints but we don’t know what those are.

So Alexandra Trese’s exploits are more exciting than even those of another tough female investigator with a mysterious past would be, even more intriguing than another story illustrated by Ka-Jo Baldismo would be. And these two volumes are already very good urban fantasy to begin with.

I won’t try to describe all of the stories here, but you know the general type – mysteries about the supernatural, with a heroine we slowly learn more about, a woman with a direct connection to these creatures herself…whatever the exact nature of that connection is. Tan tells those stories well, and Baldismo shows us that world, in black-and-white frames that look like a world illuminated by lightning.

Posted by Budjette at 11:13 PM No comments: Links to this post 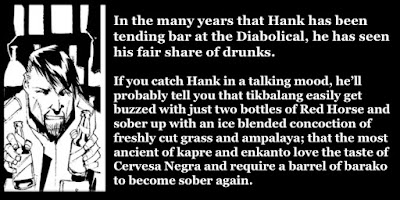 READ THE COMPLETE STORY AT:
http://diabolical13.blogspot.com/2009/04/coffee-black.html
Posted by Budjette at 10:38 PM No comments: Links to this post

Email ThisBlogThis!Share to TwitterShare to FacebookShare to Pinterest
Labels: Stories from the Diabolical

Posted by Budjette at 2:09 AM No comments: Links to this post Posted by Budjette at 10:53 PM No comments: Links to this post